“Genghis Khan and the Making of the Modern World,” by Jack Weatherford

“A leader should demonstrate his thoughts and opinions through his actions, not through his words.”
― Jack Weatherford, Genghis Khan and the Making of the Modern World

“The first key to leadership was self-control, particularly the mastery of pride, which was something more difficult, he explained, to subdue than a wild lion and anger, which was more difficult to defeat than the greatest wrestler. He warned them that “if you can’t swallow your pride, you can’t lead.”

“If you can’t swallow your pride, you can’t lead. Even the highest mountain had animals that step on it.”

― Jack Weatherford, Genghis Khan and the Making of the Modern World

In Genghis Khan, Weatherford resurrects the true history of Genghis Khan, from the story of his relentless rise through Mongol tribal culture to the waging of his devastatingly successful wars and the explosion of civilization that the Mongol Empire unleashed. 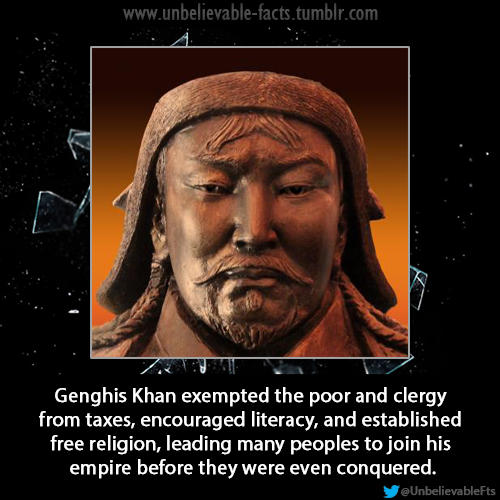 The U.S. legal and governmental systems are far more based upon Genghis Khan’s model than religious sources such as The Ten Commandments.   Instead of the Commandments, Roy Moore should have put a statue of Khan in front of his courthouse. 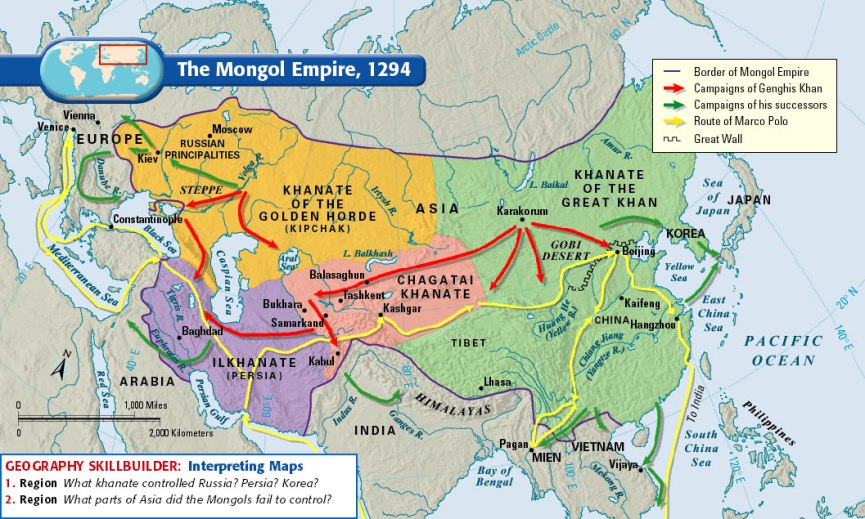 2). What are the strengths and weaknesses of Weatherford’s presentation? To what extent do you accept his argument that the Mongols are the pivots upon which modern world history turns?

3). How would you begin to describe the Mongol way of war? How and why did the Mongol empire spread so quickly? Where, when and how was the Mongol expansion halted?

4).  What other features of Mongol culture seem most interesting, and why? What was most distinctive about such social institutions and relationships as religion, law and gender roles?

5).  How and why has the image of Genghis Khan and the Mongols shifted over the centuries? What has been the story of this “afterlife” in Europe from the 14th century onwards? What have been the most important positive and negative stereotypes and how would you begin to account for these?

6).  To what extent does the historic clash between nomadic groups and urban cultures provide a key to understanding both the Mongols and they ways in which they have been portrayed down through the ages?

7.)  Does the life of Genghis Khan offer backing for the “Great Man” theory of history? How important were his individual character and decisions for the rise of the Mongol Empire? How is it possible that an outcast child could rise from such a lowly beginning to become the Great Khan?

8.)  How would you compare and contrast Khubilai Khan with Genghis Khan? How did the process of empire-building change the Mongols? To what extent is it appropriate to speak of a Pax Mongolica?

9).  What, in your own opinion, are the most important legacies of Genghis Khan and the Mongols?

Jack McIver Weatherford is the former DeWitt Wallace Professor of anthropology at Macalester College in Minnesota. He is best known for his 2004 book, Genghis Khan and the Making of the Modern World. His other books include The History of Money; Indian Givers: How the Indians of the Americas Transformed the World; and The Secret History of the Mongol Queens: How the Daughters of Genghis Khan Rescued His Empire.